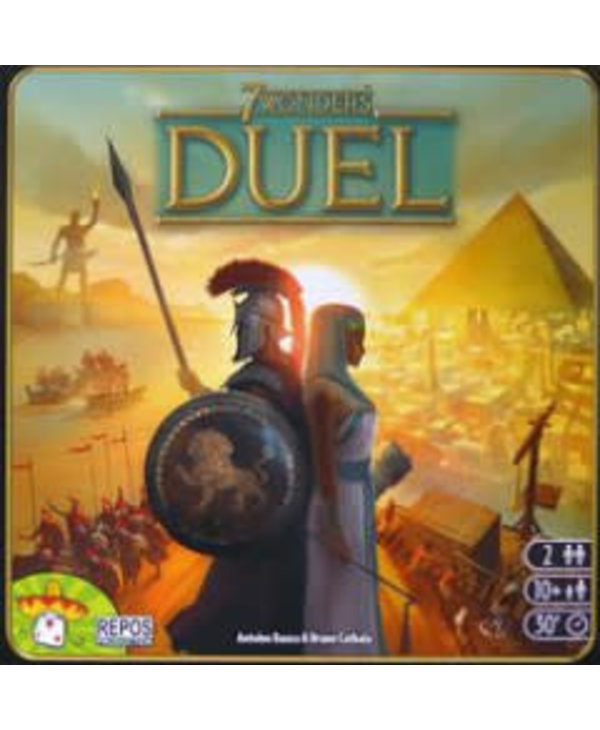 7 Wonders Duel, a two-player game in the universe of 7 Wonders, the most awarded game in the world!
Challenge your opponent and bring your civilization to victory with prestigious buildings, military strength, or scientific supremacy. All in only 30 minutes!

Develop your City by constructing Buildings.
Each building lets you improve one of your city's 4 paths of development.

Civilization was born from evolution.
A game of 7 Wonders Duel plays over three rounds, called Ages, during which you will choose cards with increasingly powerful effects. Each card you choose will influence your general strategy.

Military Supremacy
Each shield represented on the military Buildings (red cards) or Wonders allows its owner to immediately move the Conflict pawn one space in the direction of the opposing capital.
If the Conflict pawn enters the space of your opponent’s capital, you immediately win the game via military supremacy.

Civilian Victory
A game ends immediately in the case of a military supremacy or a scientific supremacy.
If no player has won a victory through supremacy before the end of Age III, the player who has the most victory points wins the game.

7 Wonders Duel is also:
Specifically designed for only two players.
Full of countless ways to interact and different strategies to pursue that make each game thrilling from beggining to end.
Made by two of the best contemporary designers (Antoine Bauza and Bruno Cathala) in the universe of the most awarded game in the world.
New illustrations that enrich and complement the 7 Wonders universe.
Two expansions: Pantheon and Agora (October 2020) for even more intense and strategic gameplay.