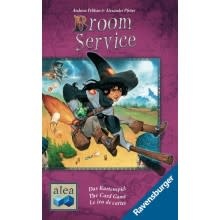 The Broom Service witches are flying again! – Now in a card game version!

Wild witches soar on their brooms collecting colorful potions in this card version of the award-winning board game Broom Service. Choose and play the right cards, at the precise moment, and zoom to victory!

Game play:
The game is played over 4 rounds, with a minimum of 3 to a maximum of 9 turns per round. Each round, players simultaneously select 3 of their dealt witch cards, and then take turns playing one witch at a time. Each witch has a brave action and a cowardly action; the brave action will gain you more potions, but is riskier, as another player could steal the action from you; the cowardly action is safer, but will gain you less potions than a brave action. How well can you bluff your opponents?

Depending on your strategic play and a bit of luck, over the course of each round, you will begin to acquire potions. Collecting potions of the same color, as well as collecting brave potions, earns you victory points at the end of the game. Extra victory points can be earned by completing task cards.

Game end:
The winner is the player with the most victory points after all 4 rounds are complete and end-of-game bonus points have been awarded.